WHO IS THE MYSTERIOUS HELMUT LANG?

You can’t deny the impact Helmut Lang has had on what we are wearing right now. He is the person who has shaped and defined the looks we see today in our society. He changed the idea of what luxury fashion is today.

WHO IS HELMUT LANG?

Peter Scepka also known as Helmut Lang was born in 1956. When he was 2 years old, Lang’s parents divorced, which led to him living with his parents in Ramsau am Dachstein. His grandfather taught him shoemaking, who was making hiking boots.

When Lang was 10 years old, his father picked him up from his grandparents to live with him, back in Vienna. His father took him to live with him and his stepmom, which he couldn’t bond with, to the suburbs of Vienna where he lived till he was 18 years old. On the day he turned 18, he left his elderly home to live on his own. He moved to the first district of Vienna. 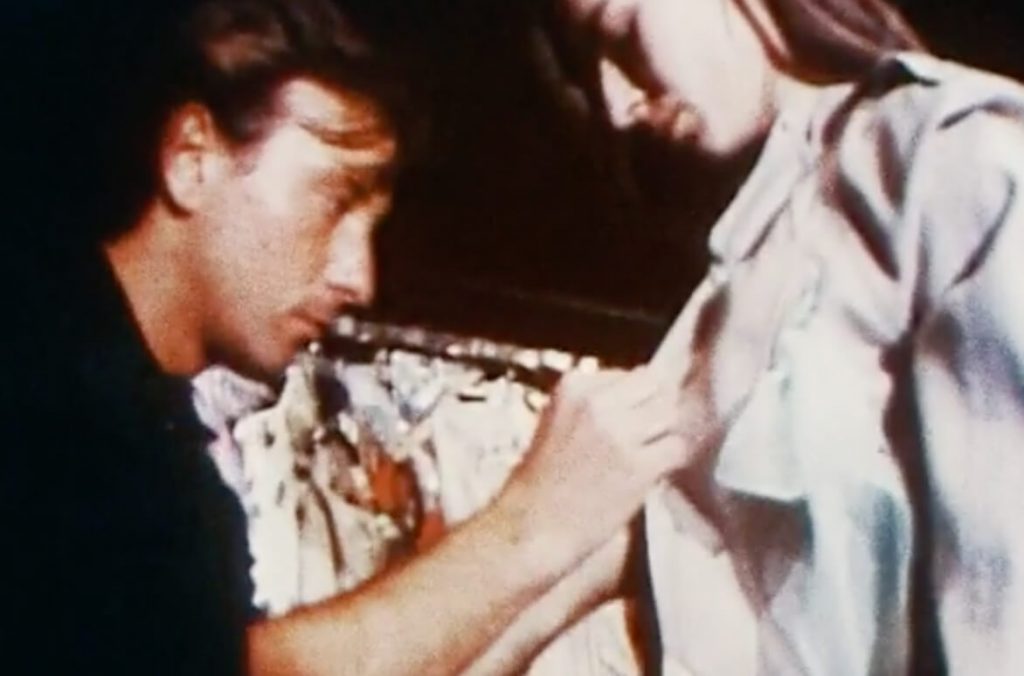 Arriving in Vienna, it wasn’t very hard to get in touch with other creative minds in the city. He got invited to a lot of parties according to Lang himself, he said : ‘Once I arrived there, I was young, I was good looking and I was not stupid, so I got invited everywhere’. At this time, he decided to use the last name of his grandparents, which was ‘Lang’.

Lang had a degree in economics, which would have assured him of a good job in the future. People he met always said to him: ‘You should be doing something creative’. That is when he started to create little sculptures. This didn’t generate any income for the young creative. He started designing out of financial necessity, he needed the money. The very first garments he designed were a tee and a pair of pants. His friends loved what he designed and wanted to buy these pieces. That is where it all started. He landed into fashion purely by accident according to Lang himself.

At 23 years old, Lang opened his first small boutique in Vienna. Quickly after that, in 1980, he did his first ever show. This show was held at the Secession building in Vienna. This show was a very big event and very glamorous instead of ‘minimalistic’. He borrowed money from friends to realize this show, because he didn’t had a lot of money. After two big shows, he was in a lot of debt, so the executor would come by every week to collect debt, but he didn’t had any money left. He told in a story that at one point, the executor even brought sandwiches for him.

In the years to come Lang made a living as a shoe salesman and a bartender. Yet he still designed garments. Lang established ‘Helmut Lang’ in 1986. He found that only good designs were not good enough, the designs also needed to be shown on the right people. The perfect embodiment for his designs and aesthetic was Cordula Reyer. Cordula Reyer was a Austrian model whom he met through a series of exchanged glances at a coffeehouse in Vienna. They became friends and she became Lang’s most important model. Lang met Elfie Semotan, she became the personal photographer of models for Helmut Lang. She loved the clothes that he designed and they had similar taste in models so she loved working with him. He loved to collaborate with other creative people. 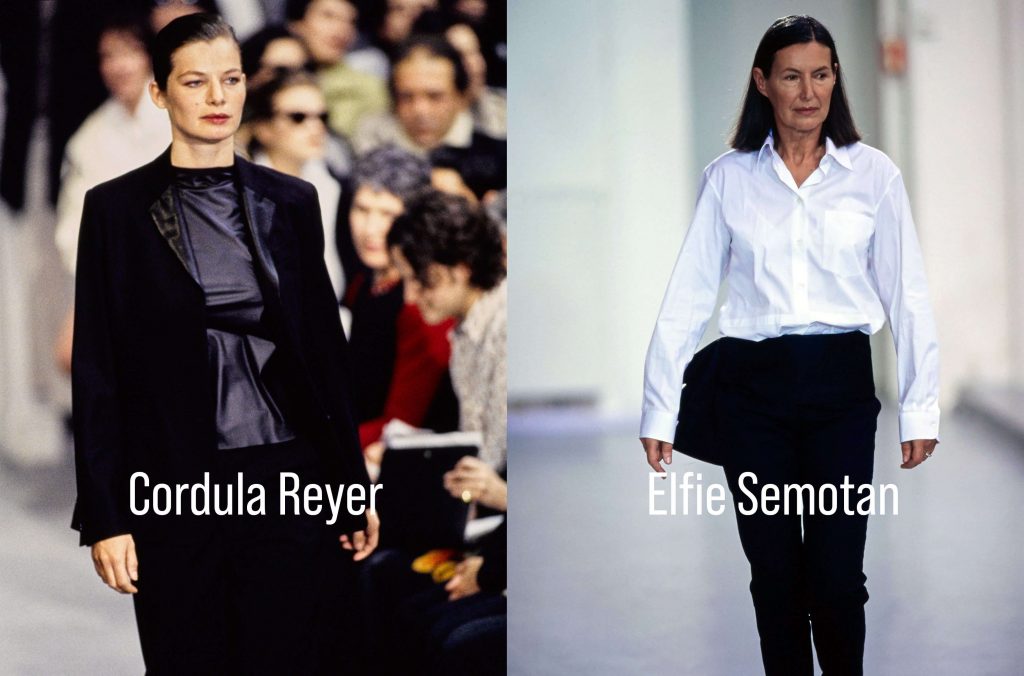 Lang often visited Elfie Semotan in the countryside where she lived with her husband Kurt Kocherscheidt. Kurt Kocherscheidt was an artist, much like himself. Lang always stayed longer than initially planned, he was always talking to Kurt about art and in which ways their work was similar. Kocherscheidt became Lang’s mentor and personal advisor.

In the same year, 1986, Helmut Lang did his first woman show under the name ‘Helmut Lang’. This show was being held in France, Paris. At the Centre Pompidou. The setting was classic and informal, much like a coffee house. His future signature style was already very vivid in this show, elegant and ‘minimalistic’. I have added the quotation marks to the word minimalistic cause everybody has his own vision on what minimalistic means to them.

One of the things that made him stood out in that time of fashion, was that the clothes that were shown, could be used as everyday wear. Unlike a lot of brands from that period of time. Lang’s work was seen as sober, sexy, androgynous, classic and ‘minimalist’. The development of Lang’s work was traceable throughout his collections. By using the principle of further developing garments from older seasons, he’d allowed himself to get more creative with different kinds of textures and fabrics. Making use of rubber, plastic and in some cases even tar.

Lang was awarded the: ‘Best international menswear designer of the year, 1997’, the same year he moved the company to New York. He felt it was time to move the company because he felt that Vienna had the tendency to hold people like him back. The first ‘Helmut Lang’ store in New York was on 80 Greene St. in Soho. A neighborhood where a lot of artists had their ateliers.

New York was deeply associated with yellow taxi’s, they were everywhere. Lang came with the brilliant idea to start marketing the brand on taxi’s. This meant that even taxi’s were being associated with ‘Helmut Lang’, this was a master move on Lang’s end.

In the year 1998 Lang would be the first designer to show his Fall 1998 collection on the internet, this was due to a different time schedule between the shows in Europe and The United States.

He was scheduled on the European time and the Paris shows, so he was ready way before he could show the collection, because the New York shows were later than the Paris shows. He could not start on a new collection before he showed the other one. That is when he decided to show his collection earlier. Lang initially had no intentions to move the entire calendar. After he started showing his collections earlier, everything moved, New York started to show collections first, before Paris. Lang is the particular reason why the new season starts in New York rather than in Europe, what it once was. 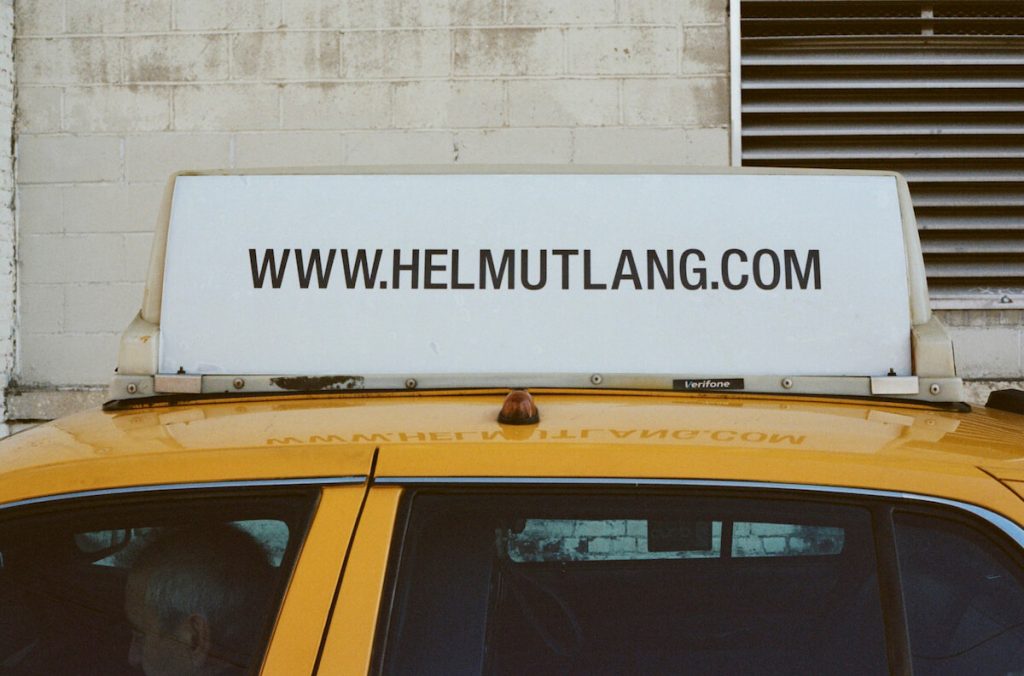 Lang loved working with other artists, such as Louise Bourgeois and Robert Mapplethorpe. In a way, they became the face of Helmut Lang by campaigns they did for Helmut Lang.

He started to realize projects with Jenny Holzer, who was a feminist artist. They created a perfume together. The whole idea of this perfume was, to find a human scent and to make it smell like your loved one. The fragrance was meant to evoke the scent left by a lover on the sheets.

THE END OF HELMUT LANG AS A FASHION DESIGNER

It was in 1999 when Lang sold Helmut Lang partially to the Prada Group. They bought 51% of the company stakes. He would still do the designing and campaign aspect, but the Prada Group would do all the production and everything around that process.

Late 2004 Lang stopped designing and quit the entire fashion world. He left quietly after the spring/summer collection of 2005. Lang was done with the fashion world, stopping at probably the height of his career in the fashion world. Now, he had finally time to start fully focusing on creating as an artist and make art.

A fire in the building occurred in the building of his atelier in New York, a part of his archive was burned and damaged by this fire. Luckily, the most important pieces of the archive were already sent to museums and archives all over the world. There were over 8.000 garments left from the archive, almost all of it was burned or damaged. Lang decided to re-use these garments to create sculptures for his new life as a visual artist.

Till this day, Lang still wants the art works to speak for him, instead of the artworks being judged because of the person who made it. 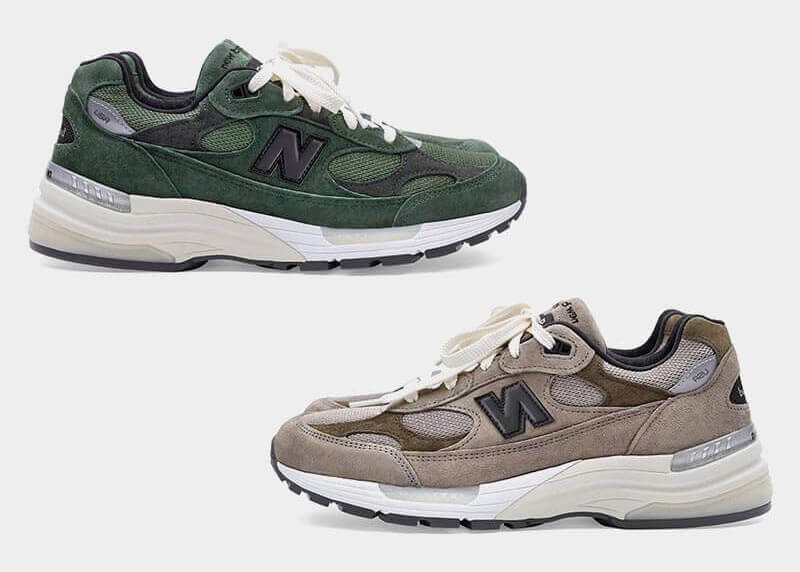