Troy Barnes a.k.a Childish Gambino a.k.a that dude from ‘This is America‘ Donald Glover (his real name) started to be recognized when he catched a lot of screen time for the great tv-series ‘Community’. It’s one of the best television shows out there, like really, it’s probably my favorite. Glover plays the character of Troy Barnes, who is like this witty, funny, unharmful kid. However, if you’ve never heard of it before, I highly suggest you check it out, I guarantee you won’t regret it. A small piece of advice from me: watch till season four, after that, it gets less entertaining.

Glover is a multi-talented artist with a passion for acting, rapping, singing, directing and a whole lot more, but he’s still using fashion as a visual creative outlet. Hence why he’s came out with great outfits over and over again. Entertaining is what he does best, whether he’s rapping, acting or shining in ridiculous outfits. Today we are here to check out how and what he wore over the last few years.

Glover and his fanatic love for suits

Instead of letting expensive suits get the best of him, the actor knows exactly what he can or can’t pull off. Though, we’ve never seen him wear anything that he can’t pull off. It is really important to know the shapes of your body, it’s essential in dressing yourself the right way, because, even if you wear the most expensive clothes, if it doesn’t fit your body type and its shapes, it will still look awful.

From Gucci to Salvatore Ferragamo to Christian Dior by Kim Jones, he knows exactly what to wear and complement his shapes. And by the looks of it, he wears it with extreme confidence on the red carpet. Above all, confidence always seems to be the ‘secret’ sauce to anything.

Applying perfect coziness to your fit is essential, but when it also increases the level of your outfit, you’re like a wizard. What often happens is that when you start wearing old fleeces and sometimes fleeces in general, the whole aesthetic of the outfit gets wrecked. However, Glover knows how to implement such pieces in his overall aesthetics, positively.

The fleece in this specific outfit is from the New York based brand Bode, by Emily Bode. An amazing iteration of the usual fleece jackets / pullovers. On a side note, the sneakers are from the L.A based brand called ‘Rhude’ by Rhuigi Villaseñor.

PS. Slide for a fuzzy surprise.

Observing his looks whom stand on the more casual side of his appearances, you know exactly what he’s trying to accomplish with his outfit….exactly nothing, he’s just living his best life expressing another one of his creative outlets through fashion. Well mr. Glover, we applaud- and thank you for that!

So basically, the range within his casual outfits in terms of diversity are pretty outrageous. Ranging from really short shorts to casually rocking 70’s inspired looks. That’s probably the main reason Glover gravitates that much to Gucci, who’s identity is literally based on 70’s retro references and clothes.

It seems pretty obvious, but I sure do need to emphasize that he doesn’t really feels the need to grab the attention on his outfits that he does. He usually throws just one designer piece into his outfit, just to spice it up. But he doesn’t seem to be trying really hard. And that is exactly what makes him and his fits so likeable, he seems almost relatable, only thing is, he wears bespoke tailored pieces made by Allesandro Michele and us… well, you can fill the blanks yourself.

In conclusion, Glover just wants to be as comfortable as possible at all times. If you watch closely, you’ll never see him wearing a classic tie beneath his suits, just to give the look that he’s rocking a more casual overall vibe. 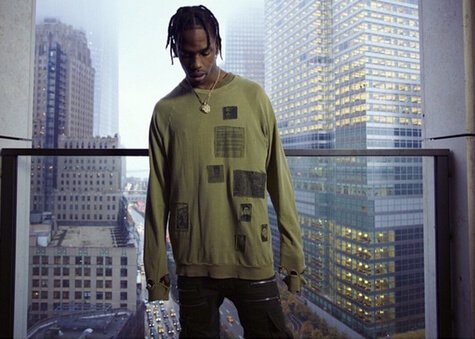 Archival Fashion Is A Recurring Theme In Travis Scott’s Dictionary